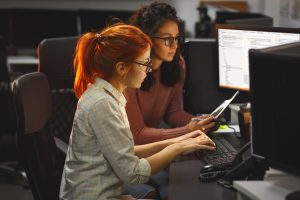 A little-known fact in the tech industry is that a woman wrote the first instructions for a computer program. Ada Lovelace (also known as the Countess of Lovelace) was born in the early 19th century in London. When asked to translate an article on an analytical engine from French into English, she also added her… END_OF_DOCUMENT_TOKEN_TO_BE_REPLACED

On December 6, VitalSource employees spent the day making a difference and giving back by helping the nonprofit organization Christmas House, which provides an opportunity for low-income parents to select free holiday gifts for their children.